Joaquin Correa’s late equaliser denied Liverpool victory on their Champions League return after they were held to a 2-2 draw by Sevilla at Anfield in their Group E clash on Wednesday. 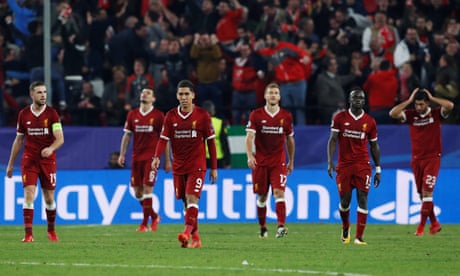 Liverpool looked to be feeling the effects of the weekend thrashing at Manchester City when they conceded a soft opener early on, allowing Wissam Ben Yedder to tap home five minutes in.

They were soon level through Roberto Firmino 16 minutes later, before Mo Salah turned the match on its head 37 minutes in, as his deflected effort gave Liverpool the lead. Firmino then should have extended Liverpool’s lead from the spot after livewire Sadio Mane had been felled, but saw his penalty cannon back off the post.

After the break, Liverpool continued to create and miss chances, and that proved costly as Correa levelled things up with 18 minutes to go.

Philippe Coutinho made his return to the side, but couldn’t create a winner, as Joe Gomez’s late red card ensured Liverpool fans headed home frustrated.

The tension around Anfield was palpable from the off, and it wasn’t long before fans were really fearing the worst, as Sevilla worked the ball well to Sergio Escudero, he squared into the danger zone, Dejan Lovren completely missed it, allowing Ben Yedder all the time in the world to tap home.

Liverpool responded superbly. Mane was denied by a smart save from Sergio Rico, before Firmino had the hosts level. The football was excellent as Alberto Moreno and Jordan Henderson played a neat one-two, the Spaniard raced to reach the return, before squaring for Firmino to tap home.

The big news from Anfield was that Philippe Coutinho returned to the fray, but only on the bench. Mo Salah had been a doubt through illness, but was fit to start.

Joe Gomez was handed a starting berth, with Loris Karius in goal, as expected. Sevilla had Nolito missing, with Joaquin Correa coming in.

Liverpool will look to bounce back in the same surroundings on Saturday when they host Burnley at 3pm.